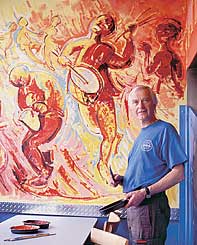 Sigmund Aarseth was born in Hjørundfjorden on the west coast of Norway in 1936, but has been living in Valdres for the last 45 years. In recent years he has focused on fine arts, but earlier projects varied from sign and banner painting to interior decoration, restoration, rosemaling and architectural drawing.

Rosemaling brought him to the U.S. for the first time in 1965. Ever since, he has been visiting once or twice every year, exhibiting, teaching courses and doing interior decoration commissions in 19 states. The first projects were commissioned by the Norwegian Board of Export, and were related to trade shows in large malls. Later, there were courses run by Vesterheim Norwegian- American Museum in Decorah, Iowa, and in a number of other places from east to west. There has also been a number of interior design and decoration commissions, particularly in Chicago.

He has always had an interest in the folk arts of Norway, and in the early years his interior work was dominated by the traditional Norwegian Rosemaling style. Since then he has developed a range of decorative styles derived from Rosemaling and other traditional decorative painting techniques.

It is no doubt as a landscape painter that Sigmund is best known in his native Norway. He prefers to paint directly from life, so throughout spring, summer and fall he spend the majority of his time outdoors, capturing the ever-changing light and seasons of Norway on canvas.

During the long Norwegian winters the harsh climate prevents him from working outdoors, so during this time he has gradually developed a parallel career in the decorative arts. It is during these winter months that most of the interiors in his new book were created.

Sigmund has exhibited all over Norway, as well as in Sweden, Iceland, Germany, Austria, Switzerland, England, Spain and the U.S.